Attending the facilitator training workshop hosted by PhotoVoice in London in May 2013 marked a major step in my journey with participatory photography. I’m an Erasmus Mundus doctoral fellow in the programme Doctorate in Cultural and Global Criminology who chose a participatory photography method to conduct my research. The PhotoVoice workshop provided an intense, three day session where I learned a host of skills that assisted with my doctoral research.

I moved to Budapest, Hungary to start the research a few months after the Photovoice training.  For my doctoral research I worked in partnership with the local non-governmental organisation The Blue Point Foundation. Blue Point assists with providing health and social services to one of the most marginalised and excluded groups in Hungary: injecting drug users. Blue Point aims to reduce the harms related to drug use (including the spread of blood borne diseases like hepatitis C and HIV) through nonjudgmental and non-moralising approaches. 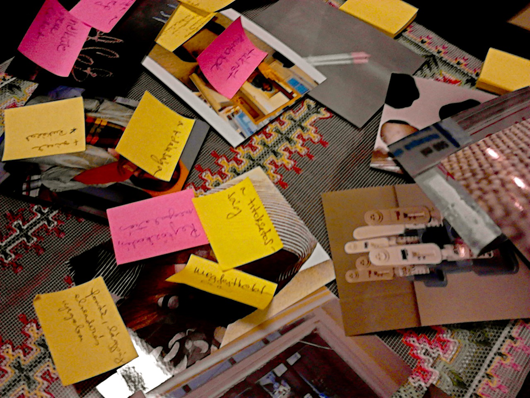 A kaleidoscope of images and post it notes during one of the participatory photography workshops. Photo taken by Camille.

Unique to all harm reduction centres in Hungary, Blue Point also holds a weekly women’s-only day called ‘Csere Csak Csajoknak’. This roughly translates to ‘Chicks Only Day’. My project consisted of a number of participatory photography workshops with the employees of the Chicks Only Day, which explored concepts of ‘harm’ and ‘harm reduction’ through photographs. As more photos were taken, the images were grouped and labeled by the employees based on content and composition.

I also gave cameras to clients of Chicks Only Day and interviewed women about their photographs. Half way through the project, the employees chose a selection of their photographs for me to show to clients.During the workshops, employees first assigned descriptive words or titles to each image, which was placed on the back of the photograph with a Post-It note. I showed the photographs to clients and asked them to write down their reactions to the images. Then, I showed them the employees responses to compare the different interpretations.One of many photos that generated discussion was a photo of a police car blocking a sidewalk andÂ bakery entranceÂ in the neighbourhood where Chicks Only Day operates.Â One of the employees described the photo as ‘the order of disorder’, because the police presence in the neighborhood was often a source of frustration and anxiety for employees. Clients who saw this photo told me their stories of interacting with the police; one client ironically joked that the photo should be called ‘friends’. This image is one of many examples of how employees and clients captured ‘harm’ and ‘harm reduction’ in their photographs. 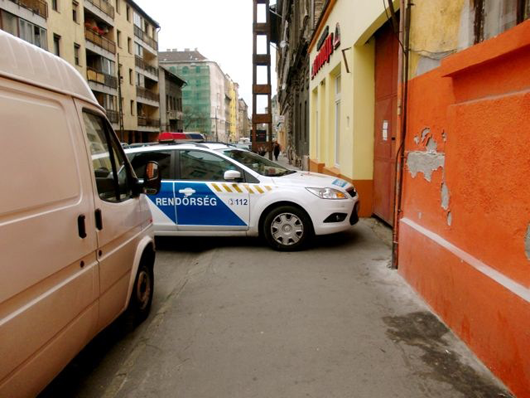 Harm caused by the local police, captured by a Chicks Only Day employee. Photo taken by a research participant.

The months of photo taking, interviews, workshops and discussions culminated in a public photo exhibition titled ‘Chicks on the Corner’ (‘Csajok a Sarkon’ in Hungarian). This event was made possible because of the collaboration and hard work of the employees and volunteers of Blue Point and Ankert, the venue where the exhibition was held. The event had three aims; first, to showcase a selection of the images that employees and clients of Chicks Only Day had produced; second, to raise money for Chicks Only Day through donations, where donors received a print of one of the photographs; and third, to celebrate the fourth birthday of Chicks Only Day (on the eve of International Women’s Day) with cake, drinks and dancing. The evening was a great success, and was a wonderful way to mark the end of the field research. 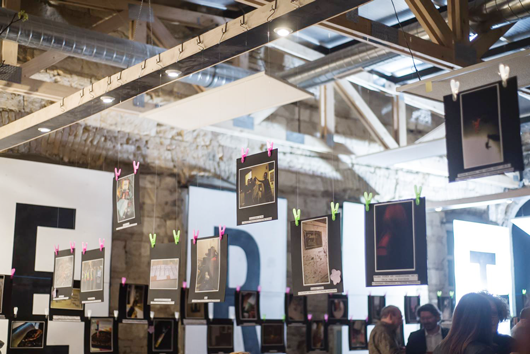 A selection of the photos hanging on display during the public exhibition. Photo taken by Emil Chalhoub.

While the project was a success in terms of fundraising for Chicks Only Day and in terms of my research, sadly the story for Blue Point is much more bleak. After a series of disputes with an unsupportive local government, combined with a lack of funding, the NGO will have to move out of the neighbourhood at the end of August. More information about this can be found here.