Advocating for the decentralisation of art

Advocating for the decentralisation of artPhotoVoiceMay 26, 2015March 4, 2022

Amina Gharred, photographer and participant in ‘Through the People’s Lens’, PhotoVoice’s partnership with the ODI, talks about the impact of photography on her life, and how she has set out to use photography as a mechanism for social change across Tunisia.

Seeing a woman with a camera taking to the streets of Tunisia and moving across the regions to capture moments and stories was uncommon before the Revolution.

A majority of people tend to associate photographs with souvenirs and memories of ‘’happy’’ moments in their lives such as birthdays, wedding ceremonies, or with festivals, fashion and magazines. While you rarely hear about photo exhibitions, if you do it’s from specialists in Fine Arts, and there were few female photographers teaching photography at the School of Fine Arts of Tunis.

Photography in Tunisia was limited and voiceless during the period of oppression, but now it’s different – with the Revolution it has found its voice, and likewise artists. The Tunisian Revolution has created immense feelings among women and young people wanting to express themselves or to tell unheard stories through graffiti, rap songs, poetry slam and photography.

I was one of those young Tunisian women who grew passionate about photography through the Revolution. I found myself using photography as a principle mode of expression, breaking free and shouting what I and others felt or wanted to tell.

It started in 2011 with posting photos on my Facebook account under an album I called ‘’In There’’. In 2012, a friend of mine one day told me: ‘’Amina you use the camera differently. Look for photography clubs where you can develop your talent’’. She woke me up.

Living in the capital during the years of my studies gave me the chance to join the first emerging photo clubs in Tunisia, the Club Photo Taher Haddad in 2012 and the Association Club Photo de Tunis (ACPT) in 2013. I started to develop my skills not only in photography, but also in my own critical thinking. I also had the opportunity to meet with brilliant Tunisian photographers, including Hamid Eddine Bouali – one of the founding fathers of photography in Tunisia – as well as young photographers and amateurs, and participate in national photo exhibitions. 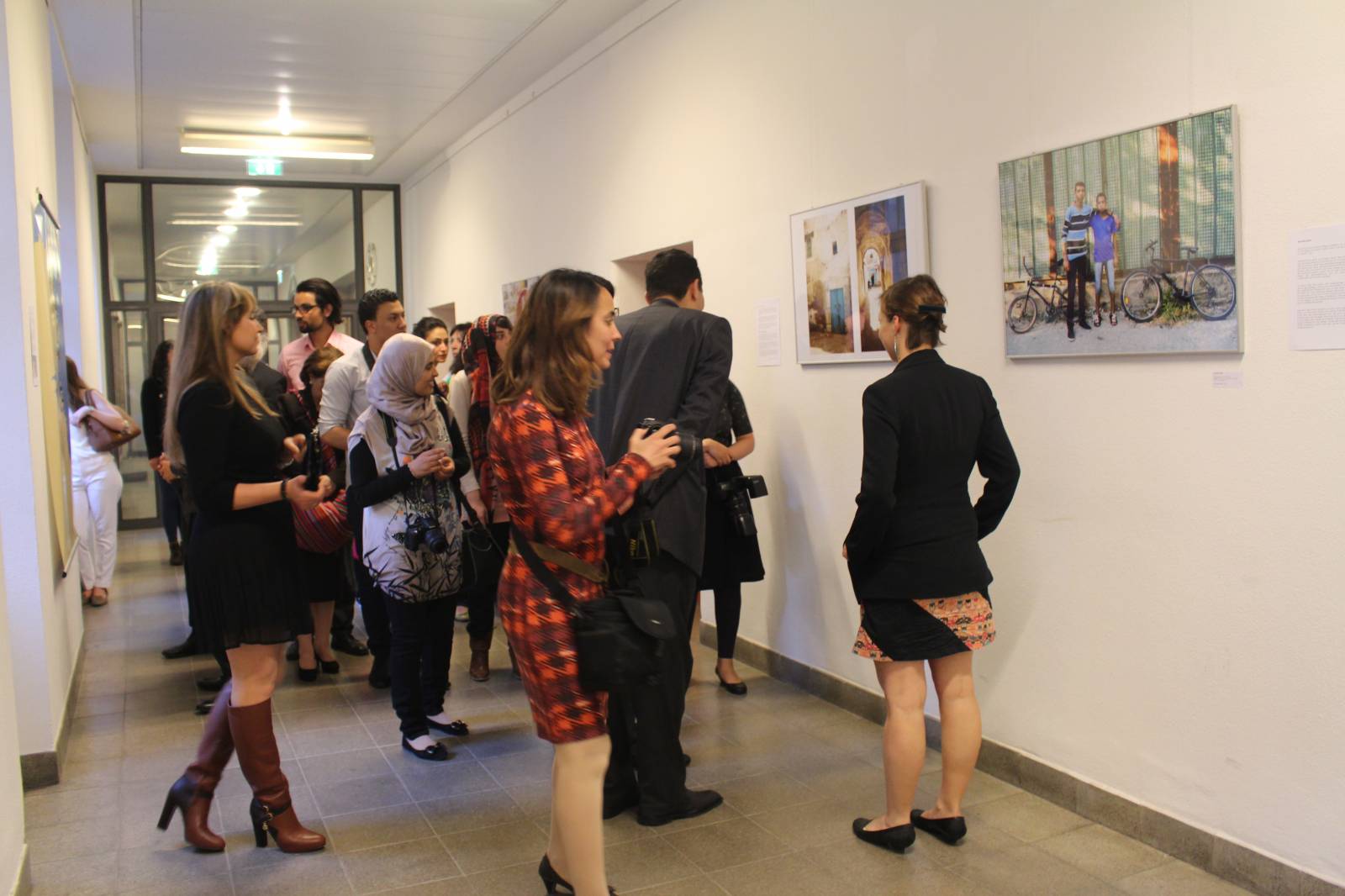 In October 2013 I took part in a photography project ‘’Blasti’’ (My Place) implemented by the German Association ‘’SocialVisions’’ on Tunisian women, where I produced a series of auto portraits. We were a group of seven women of different backgrounds who were trained by photographer Anja Pietsch, and Patricia Triki, a Visual Artist in technical and theoretical photographic skills and visual communication.

At the same time my work in civil society enabled me to travel across the country, deepening my knowledge about social issues (especially regarding women and youth), and strengthening my relations with civil society actors who believe in change and progress.

This interest in photography and social issues gave me the chance in 2014 to participate in photography workshops with a group of friends in Tunis, as part of the ODI and PhotoVoice project on digital photography and storytelling about women’s empowerment in Tunisia. Training was provided by the English photographer Jenny Matthews. 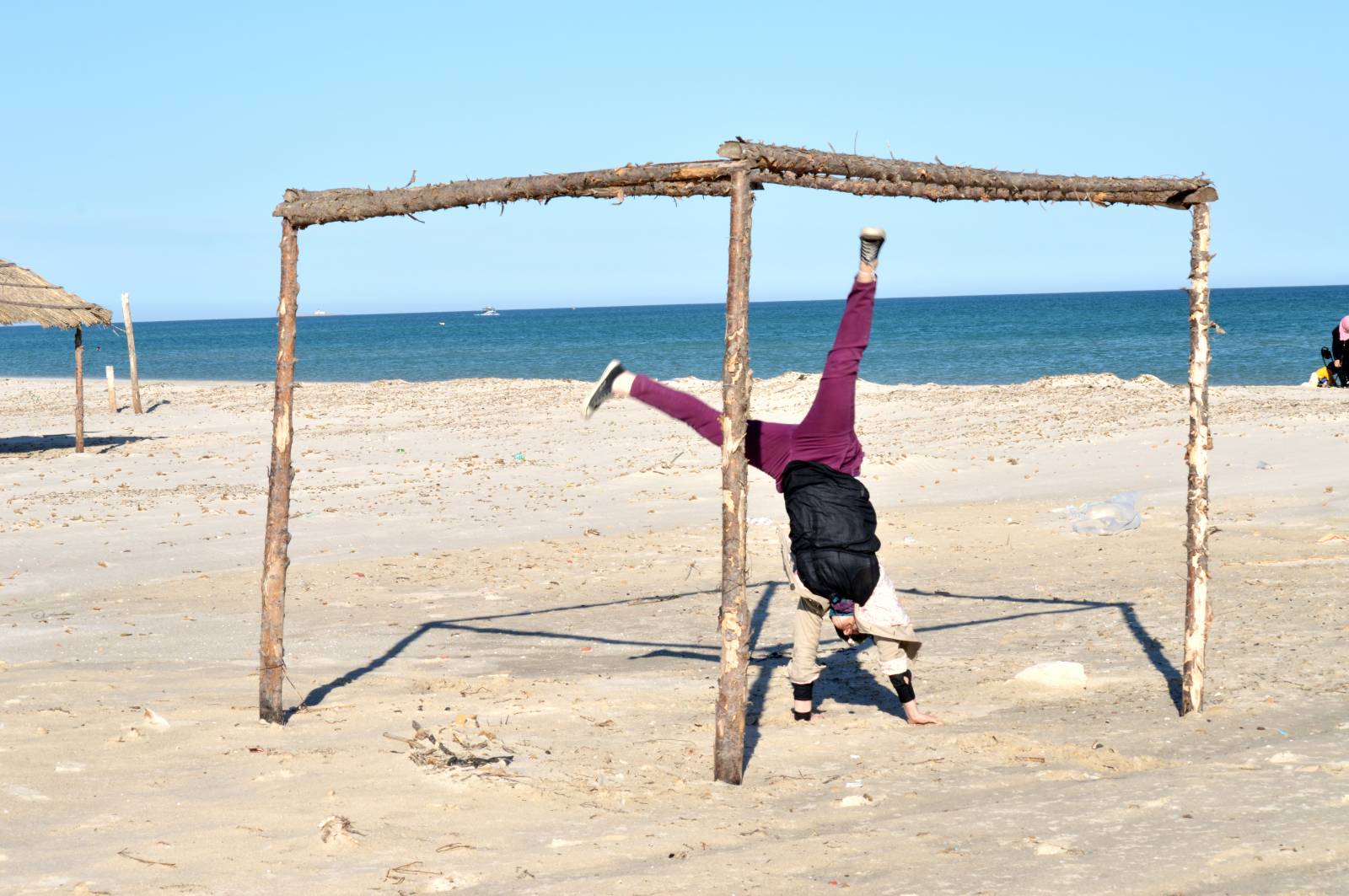 ”Out of the frame” From ‘Through the People’s Lens – a project on Tunisian women’s empowerment. © 2014/Amina Gharred/ODI/PhotoVoice

This was a turning point for all of us, as we discovered the real power of photography, learning how to address social issues through our photos, and develop photographic stories that could support global change. The resulting photographs were showcased at the Royal Geographical Society as part of a wider exhibition of images from the project.

This has encouraged my passion for photography. I have seen in it not only a tool of communication, but also seen how it builds communities, and opens up dialogues over public issues at local and international levels.

Inspired by this project, myself and some of the female photographers who participated in the workshops co-founded the Tunisian Association of Female Photographers (ATFP) in November 2014. 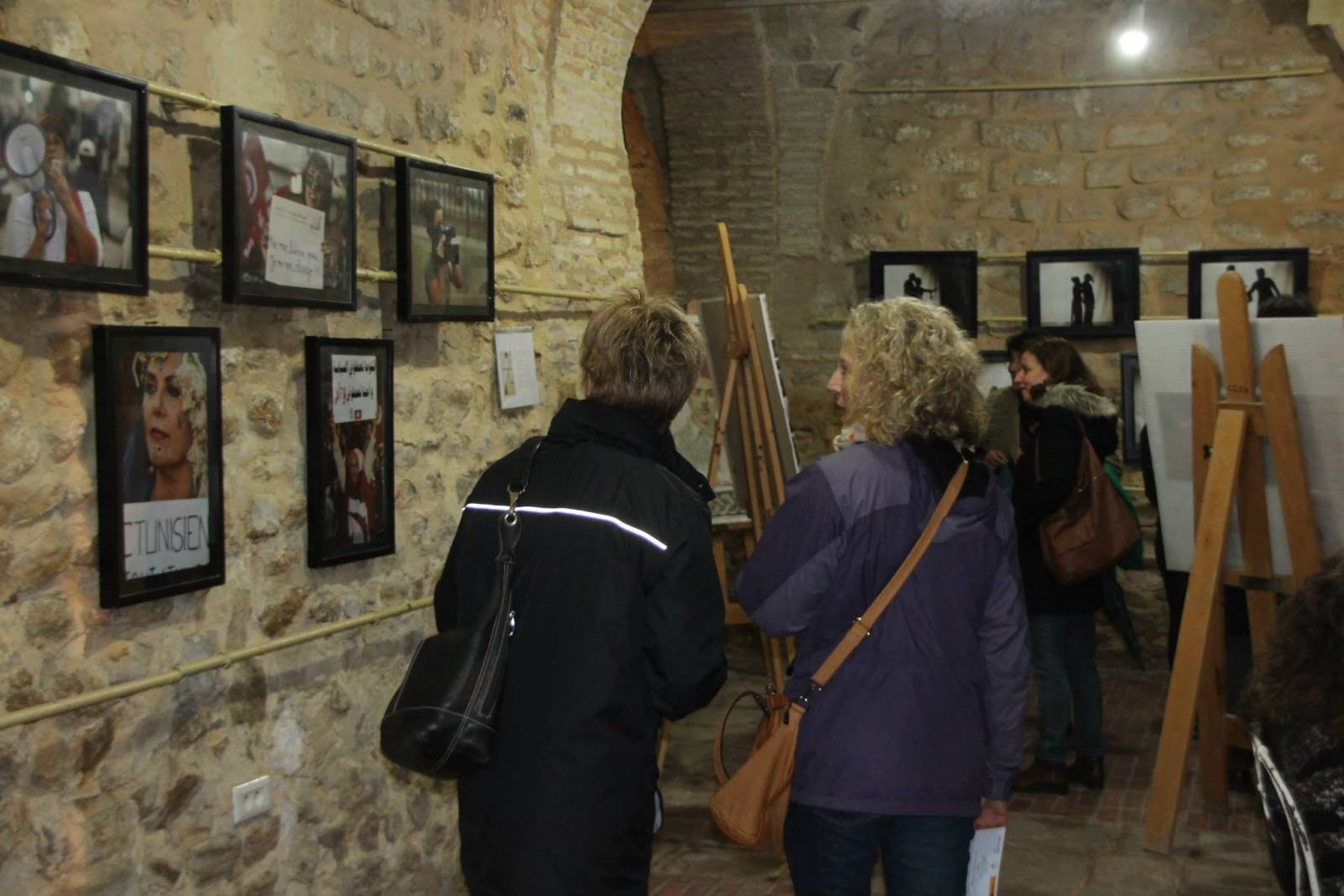 The inaugural exhibition of ATFP. © ATFP

The ATFP is now a Tunisian-based non-governmental organization that aims to establish a culture of communication through photography in different regions across the country, and to foster women’s participation in development through creative visual art. The ATFP organizes participatory photography projects and exhibitions, working in partnership with local and international NGOs and driven by a determination to generate social change through photography, and advocate the decentralisation of Art.

The group recently had their first work exhibited in Tunis which has actively engaged several women interested in photography to become members of the association and to participate in future activities.

Featured image: ‘On the horns of a dilemma…to be continued’ is a series of photos featuring Tunisian women in the town of Sidi Bouzid working in a carrot field during the day of the first round of the Tunisian presidential elections. © Amina Gharred, 2014