How Photography Helped me: Cheney Orr

Photography has therapeutic benefits that can provide catharsis for those that need it. Photographer Cheney Orr tells how he used the camera as a tool to process, cope and know his father after he was diagnosed with Alzheimer’s.

“This too shall pass,” my dad would often say, whether someone had an upset stomach or we were having a rare conversation about his Alzheimer’s. This regularly repeated phrase stuck with me. It wasn’t said in an attempt to comfort​.​ Simply, he really believed it. David Orr had the ability to accept things as they were and move forward. So when he was diagnosed with early-onset Alzheimer’s disease in late 2011 at age 61, he chose to largely ignore it. As the illness progressed well into its mid-stage, however, it transformed into frontotemporal dementia, attacking both his mind and body, and became impossible to disregard.

I was 21 when he was first diagnosed, and never got to know my dad as an adult. Over the last few years, my attempts to know him better became increasingly difficult. Conversations could only go so far or so deep, and much was left to interpretation. As a result, I used my camera to investigate my own relationship with my father, and his relationship with the disease. 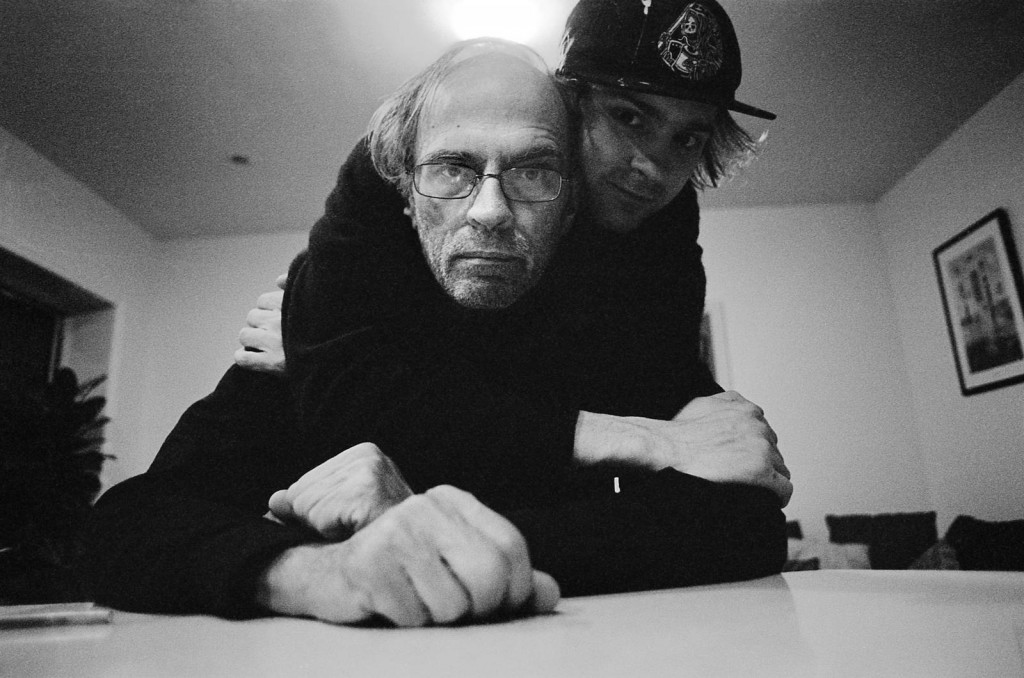 “A self portrait taken with my dad, David, in his apartment in November 2016. Between my being the main photographer in the family and the fact that we often took turns visiting David one on one, photos of us together in these years are rare.” © Cheney Orr

In the summer of 2015, David moved into an apartment where he was taken care of by a rotating staff of 24/7 home-aides. In these years, my dad and I went swimming at the local rec center pool at least once a month. A competitive swimmer in elementary and high school, he was fast, and flawlessly performed every stroke. Even as the disease progressed and tasks like trying to his shoes or zipping his coat became difficult, in the water he would leave swimmers half his age in his wake.

He began calling me a lot, usually early in the morning, catching me at work or sometimes waking me up. If I didn’t answer, he would call repeatedly, often forgetting to hang up the phone and leaving long voicemails that recorded the sounds of CNN or another TV news network. When we spoke, his voice was always cheerful on the line. “Hi! So, what about today?” Often, I couldn’t come by and told him I would be there on the weekend or the following week. Yet the next day or the day after that, he would call again, forgetting our conversation. 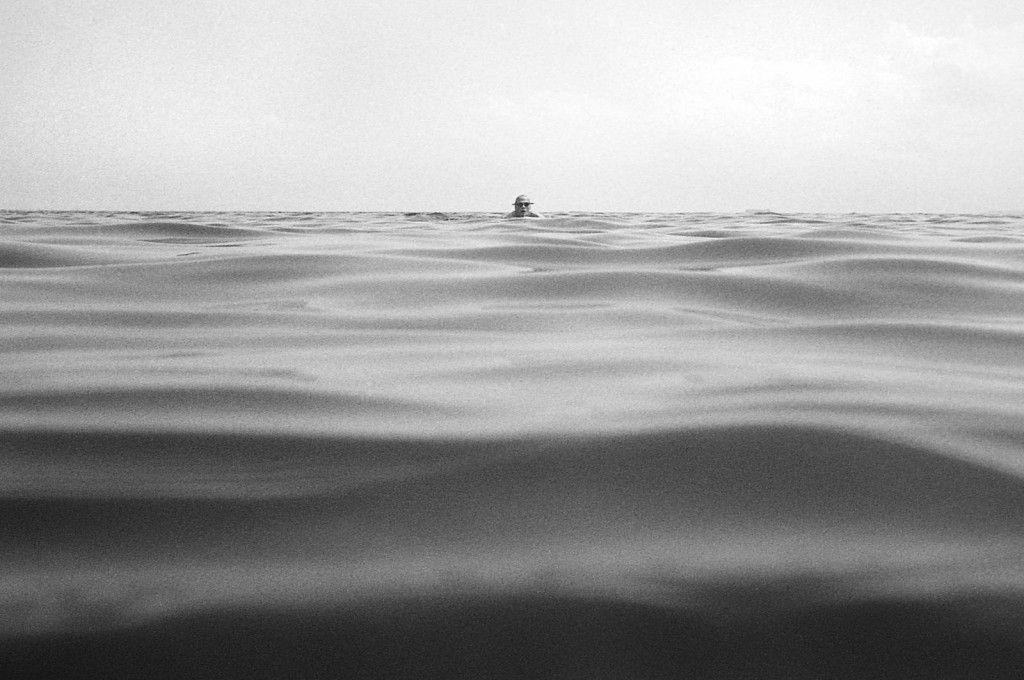 Then suddenly, in the summer of 2016, the phone calls stopped. At first I thought my dad was mad at me because I’d been working a lot and hadn’t made enough time for him. But holding grudges was not in his personality. Instead, the disease was taking a stronger grip. I believe that if he did plan to call me, by the time his brain processed how to place the call, he’d forgotten what he was doing or why. Around this time, he began to sigh and say to me without context, “I’m not very smart.”

One day in the early winter of 2016, I came by his apartment and we went out for a short walk down Eastern Parkway. I tried to engage him in easy conversation, pointing out the architecture of buildings and discussing the weather. “You’re my best friend,” he told me out of the blue. Something so simple as a visit and a walk was received with so much gratitude. A man with an unmatchable sweet tooth, his gratitude soared sky-high on those visits when I brought him a slice of key lime pie or a container of pecan pralines. Achieving happiness from the smallest and simplest of things is one of his lessons I’m still trying to fully absorb.

When the disease was in its early stages, deliberately photographing my dad was painful. Intellectually, I wanted to document his journey. I thought it might both help me personally process what was happening, and also potentially help others better understand the effects of Alzheimer’s. However, every time I lifted my camera, I felt it as a reminder that while his body was fully functioning, his thoughts, his memories, his personality – everything that made him him​ – was dying.

In the final months and weeks though, my internal reaction to photographing him dramatically changed. At this point, the disease progressed to a stage where my camera served as a coping mechanism, putting a barrier between myself and the reality of my dad’s condition. Best put, a distraction. After nearly a week of being unable to eat or drink, he died surrounded by his family in the early hours of May 1st, 2017. 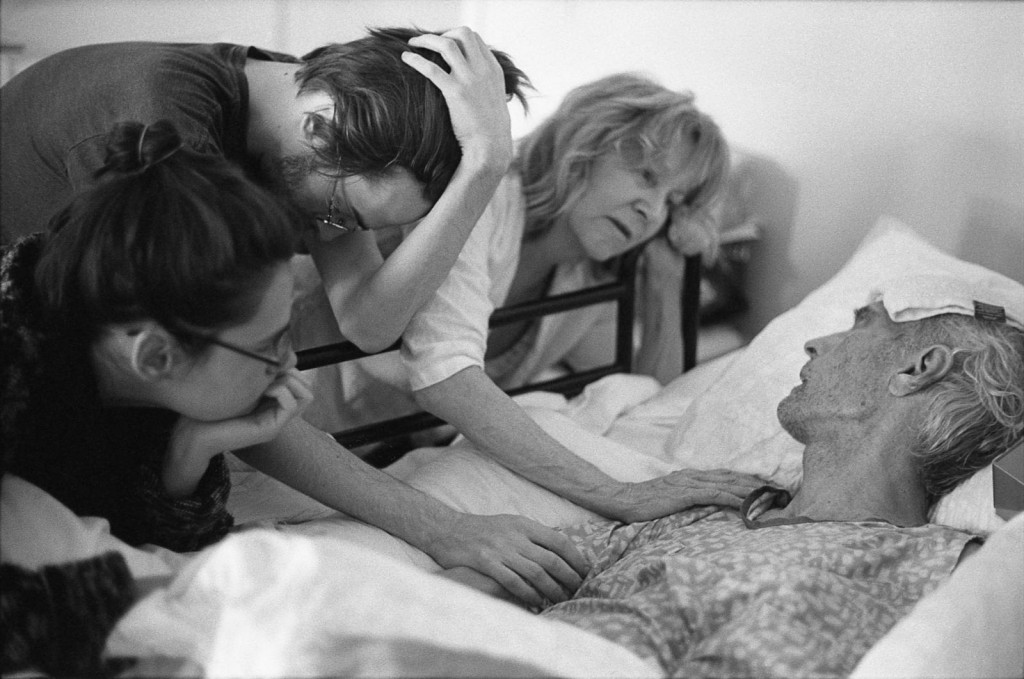 “Go to previous slideGo to next slide
During his final week, we stayed with David 24 hours a day and there were many moments we thought were his last. His chest would move rapidly and his breathing would rattle. Yet as the whole family moved close, his breathing would regulate. He remained periodically responsive and for good or for bad, our presence periodically seemed to keep him alive.” © Cheney Orr

I want to extend a huge thank you to a long list of healthcare professionals who put time, care and love into their work on my dad’s behalf. A special thanks to Violin who was my dad’s primary caretaker for three years. I wish I had more often trained my lens on her as she stood tirelessly by my dad’s side; she genuinely and deeply cared about him. And thank you to my loving family who didn’t question me as I pointed my camera during some of the most difficult moments.

I wonder if my dad would like these pictures. He was slightly self-conscious in front of the camera. Regularly, when I would try to capture a moment, he would notice and react with silly faces or gestures. Nevertheless, I think he would be proud, and would give me a hug and praise the photographs, even if he were all the while thinking: “this too shall pass.”

You can find out more about Cheney’s work here

Featured image: “Briana and a home aide in December 2016 look through the contents of “David’s Memory Box,” a collection of photos and mementos that Briana put together when David was first diagnosed.” © Cheney Orr