How Photography Helped me: Rachel Wright

Photography has therapeutic benefits that can provide catharsis for those who need it. Shutter Hub Digital Content Editor, Rachel Wright shares with us her very personal series of self-portraits. Taken during her cancer treatment the photography process acted as an emotional outlet, it provided her a space to process, reflect and make sense of her illness.

Rachel’s project was selected for the Shutter Hub GIRL TOWN exhibition at London Photomonth 2016 and the exhibition will be showing in Tel Aviv in 2018.

In October 2014 I was diagnosed with breast cancer. I was 31. To say it was a shock would be an understatement, but there wasn’t much time to process what I was feeling as I was thrown headlong into a world of hospital appointments, scans, and finally surgery, followed by 4 and a half months of chemotherapy.

I came up with the idea for this project while recovering from surgery. I wanted something to focus my creative energies on, a reason to keep practising photography. I knew I wouldn’t be getting out and about much over coming months, so I wanted to pick a subject that would be easy to photograph anywhere, that would always be around, even on the days I was bed ridden. That’s when I hit on it – me. I’d always be there.

I’d taken self portraits before, and enjoyed the process (turns out I’m a pretty patient subject when I’m the one taking the photos!), and portrait photography was something I wanted to improve at. So the idea was born – a project to keep me taking pictures, practising my photographic and editing skills. 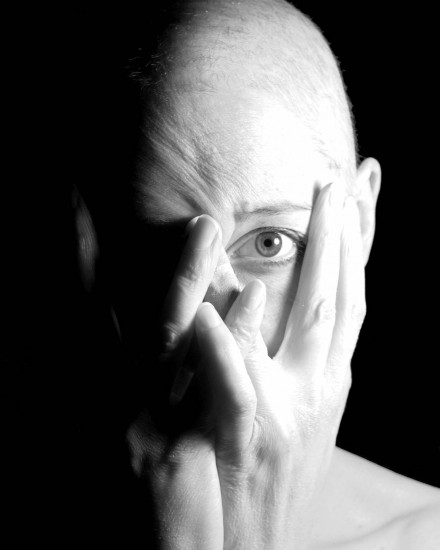 But it quickly became much more than just that. I soon came to realise it was an emotional outlet as much as a creative one. A way to express how I was feeling at any given time, to help understand the changes in my body and emotions when words could be inadequate or unreachable. I also became closely in touch with the rollercoaster nature of what I was going through. It’s easy to become caught up in any given moment, and write off an experience as one thing or another – either “it’s all terrible” when feeling bad, or “it’s not so bad really” on the good days. Yet both of those statements were true at various points during treatment, and neither were true all the time. Looking back through the photos now I feel a strong sense of that rollercoaster – smiles, tears; exhaustion, strength. The impermanence of every situation, the ever-changing nature of experience. It was not all one thing or the other, and as time went on I became focussed on documenting my experience in as honest and real a way as possible, in all its ups and downs. In keeping with this desire to convey the truth, I’ve tried to use any editing as a way of enhancing the mood or feeling of each photograph, rather than as a way to make myself look ‘better’ (or worse). 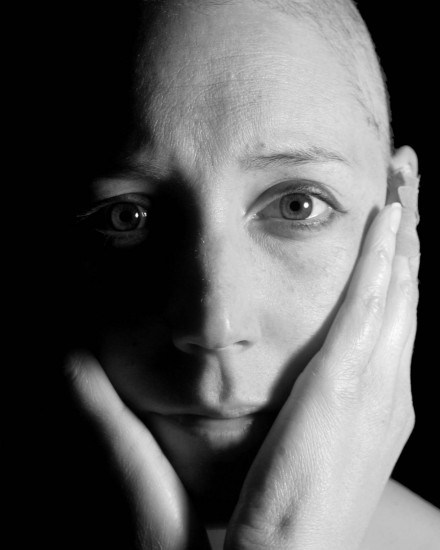 At some point during this project I started getting a sense of wanting to share the photos. Perhaps through a desire to be seen, for my experience to be understood. To be honest and real. Most of the time I was going through treatment I hid my bald head with hats and headscarves when out in public, and slapped on make-up in an attempt to cover my stubby eyelashes, thinning eyebrows and the bags under my eyes. And that helped me through, restoring a sense of normality (and it was winter – I really needed that wooly hat!) But now, having had space and time to reflect, it feels important to share the photos from that time, bald head and all. To show the reality of the impact of cancer treatment (or at least, my reality – of course everyone’s experience is different). And also that it is possible to embody beauty and femininity at a time when the socially accepted external trappings of such things have been so harshly stripped away.

So, as daunting as it is to share such personal photographs – taken during such an emotional time, in which I am both artist and subject, with the accompanying fear of criticism associated with both – here they are. The rollercoaster.

This blog was originally posted on Shutter Hub.