Let me tell you who I am

The photographer Sara Furlanetto writes for PhotoVoice on her collaborative project with refugees which aims to challenge misconceptions and create a new and more constructive visual language.

It was spring 2015, at the end of the second year of my BA in Photojournalism and Documentary Photography, when I decided to start investigating on the refugee theme. The project Let me tell you who I am is the outcome of almost a year long research across different European countries.

Coming from a region of the North East of Italy where a far right populist party widely invests on a propaganda of intolerance towards asylum seekers, and has a worrying support across all the North of the country, I felt an urge to know more about refugees and get first hand information about how European countries deal with the so-called crisis. While on the one hand we are assisting the rise of far-right movements across all of Europe and beyond, those that ooze with nationalist ideology, hate and ignorance, I believe and have faith in the power of photography as a way to break down those walls, stimulating genuine human interaction and therefore bringing positive social change. Far from the conventional way of representing them under a photo journalistic approach, I am interested in giving to the audience the experience of an intimate encounter with the person behind the figures.

Considering the refugees’ crisis since its louder burst something more than a year ago, migrants have made the headlines almost every day. We became overwhelmed by the amount of news and pictures of refugees, and we started associating those nameless people with the threat of terrorism, job crisis, and the loss of our identity. Therefore, we forgot the humanity that binds us all, and makes us aspire for the same basic things. When I embarked on this project, it felt also like a journey across the diversity of human interactions and reactions. I learnt and proved that communication is the foundation for a healthy social environment. How could closing ourselves in our shell ever be an effective and peaceful way to face the phenomenon of mass migration that we are experiencing in Europe? I personally cannot see but more conflicts deriving from the lack of interaction between the two parties, refugees and people from the hosting communities. 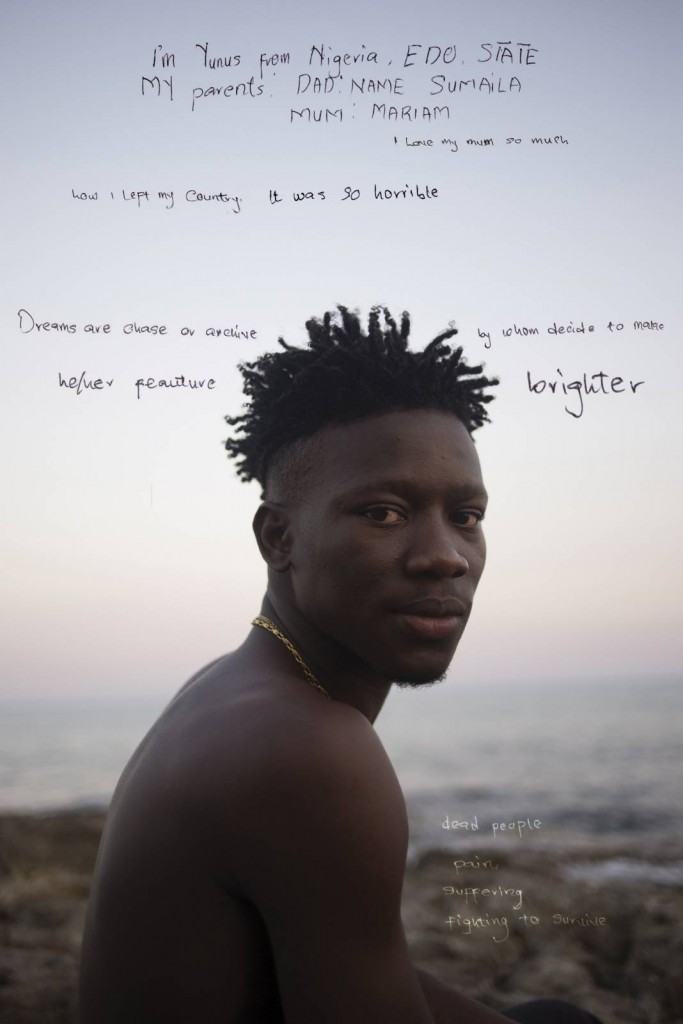 “Pozzallo, South Italy, 2 September 2015. Yunus, from Nigeria, on the beach of Pozzallo. He was granted protection and now lives in a shared flat with other young refugees. Words are extracted from his written memories.” © Sara Furlanetto

I have taken the road of a purely human approach by developing my idea, focusing on individuals, and the array of emotional and cultural elements that make their condition as refugees.

For this reason I shaped the project mostly as a collection of portraits, combined with writings or drawings that people left me upon request. The intention throughout my research has always been to involve the subjects in the creative process, in order to load the photos with authenticity through the added experience of a piece about, and produced by, the subjects.

From their side, I have observed that they felt empowered for being taken into consideration and asked to write about themselves. It is also very interesting to assist to the different ways everyone responded to the blank paper. The journey as a physical, mental and emotional experience resulted as being the most popular topic, along with contrasting feelings of fear, exhaustion, hope and relief. 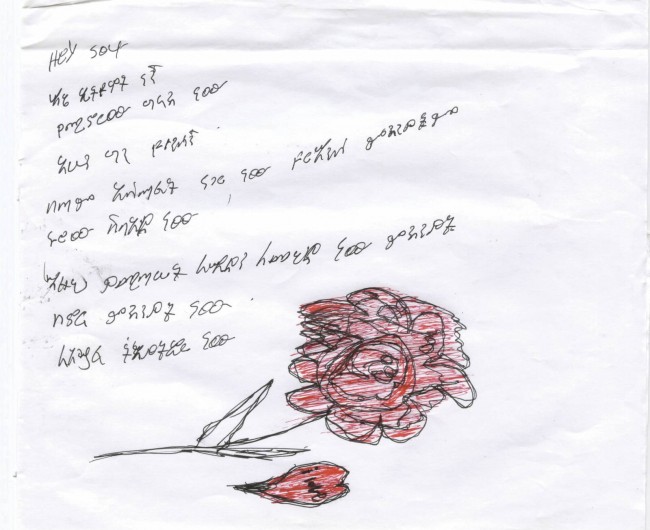 “Calais, North of France, 10 November 2015. Filomena’s statement, where she explains who she is, and expresses her frustration in regards to the Jungle.” © Sara Furlanetto

What is happening now is not just a humanitarian emergency, rather a movement that will shape a new society. We are on the stage altogether, actors of this complicated play. Not just governments have to articulate new strategies that can truly benefit both refugees and the hosting communities, but also us European citizens should individually get off from our high horse and make an effort to interact with the “other”. Surely the majority of the media has been contributing in shaping the attitude of fear and hate. This is why I believe we also need a new visual vocabulary, one that is able to touch the chords of humanity.

The project Let me tell you who I am will be exhibited at the London College of Communication from the 26th of May until the 2nd of June, as part of the degree show which opens on Thursday the 26th of May. It will also be possible to buy the printed book of the project and have a chat with me.
To register to the event, click here.

Feature image: “Palermo, South Italy, 20 September 2015. Yannick, from the Ivory Coast, on the rooftop of the church of Falsomiele, a rough area in the suburbs of Palermo. Caritas housed him and other asylum seekers within the parish premises.” © Sara Furlanetto