Participatory photography with refugees from Syracuse

Rozlynn Jakes-Johnson took on a daunting task for her capstone project in the Central New York Master of Public Health program – coordinating a participatory photography project with eight refugees, only one of whom had ever used a camera.

Next month, those “New Americans” will show off their photos to the public during a reception at the Northside CYO in Syracuse. But this project is about much more than photography.

Rozlynn is following the PhotoVoice project model, designed to build skills and empower people in disadvantaged and marginalized populations and to influence policy makers to address the needs of those communities.

“Their perception matters. Their voice matters,” Rozlynn said of the people in her study. “Not just to me, but to the larger community.”

Rozlynn has taught English as a Second Language to adults in the Syracuse City School District since 2009. The participants in the photovoice project are students in her classes. The eight in the photo project represent six different countries and native languages.

Most of them live on the North Side of Syracuse, where Rozlynn also works with the city’s refugees in two community gardens — places, she said, that are not so much about nutrition, but a means for New Americans to connect with each other and with the larger community.

“Their perception matters. Their voice matters. Not just to me, but to the larger community.

The photovoice project is an extension of the bonds created in the classroom, Rozlynn said. Her students, ranging from their 20s to their 50s, worked with each other on their photography. They spoke in English because they don’t know each other’s native languages.

In September, Rozlynn purchased point-and-shoot digital cameras online and met twice a week with the students. They discussed the project’s theme of social cohesion, which focused on community, connection and belonging — and Rozlynn gave a crash course in photography.

The students spent a week taking photos, with the idea of capturing representations of three elements – community, connection and belonging. The students were told not to photograph faces of any people, but to look for representative images.

As an example of how an image can serve as a metaphor, Rozlynn showed them a photograph of a red scarf to represent dance, and then explained how the scarf represented dance. (Rozlynn competed in semi-professional ballroom dance competitions as a teenager.)

The students then had to choose five of their photos and assign each image to either Community, Connection or Belonging. Rozlynn then tape-recorded the students explaining each photo. She transcribed their responses, which will accompany the photos when they are on display.

“I’m humbled and grateful,” Rozlynn said. “I’m in a different capacity, almost like a role reversal of teacher and student. It’s wonderful to be part of a creative endeavor like this.” 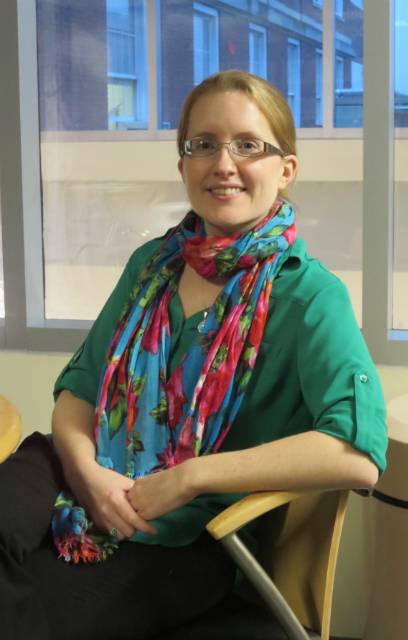 Telisa Stewart, DrPH, Rozlynn’s mentor in the CNYMPH program, said Rozlynn’s project is a good example of community-based participatory research, a method of qualitative research that empowers the subjects and can give them something in return.

Dr. Stewart said photovoice projects are demanding, and Rozlynn has been up to the task.

“She has such passion – she goes way out of her way,” Dr. Stewart said. “Her personal energy for this population is incredible. Photovoice takes someone who will persevere. It’s so much work, and you have to let go of your control as a researcher. You don’t know what you’re going to get back.”

Rozlynn, whose findings will be analyzed qualitatively for her spring capstone project, said the rewards come when the students say things like, “When I’m with people, my heart feels open.”

The project has given the New Americans ways to connect, Rozlynn said. “It’s gratifying to know what I’m providing to them gives them an opportunity to shine. They’re so excited, and I’m so excited for them.”

The exhibit is free and open to the public, and will feature music and refreshments.

This story originally appeared on the Upstate Medical University blog, written by Jim McKeever. It can be seen here.