Katy Harris ‘Communications Manager at ODI’ explores how participatory projects ensure that the aspirations, choices and voices of the underrepresented drive the development agenda forwards.

This September, as the gavel came down on the new global development goals, policy-makers and civil society activists alike focused in on a single phrase: ‘leave no one behind’. The message was simple – no goal will be met in 2030 unless met for everyone – and seemingly incontrovertible. Who could refute such a call?

What’s more, it was a timely reality check, recognising that while the MDG era had witnessed striking improvements in poverty reduction and broader well-being, such dramatic findings were based on averages – data aggregated to the national, regional or global level. For certain groups of people – the most underrepresented both within and between countries – life wasn’t as rosy as the numbers implied. Progress had not been equally shared.

But two months on, the ‘leave no one behind’ agenda has to quickly move beyond the rhetoric, if we are to avoid repeating our past mistakes. We need concrete proposals on how we (governments, civil society, private sector) can better support the aspirations and actions of the poorest people. Their voices must not only be heard but actively inform the policy decisions and investments made on their behalf. In other words, we need to enable more people to speak truth to power.

We need to know who the most underrepresented are and then find ways of capturing their choices and preferences. We’ve already shown that we can do it. The World Bank’s Voices of the Poor collected the views of over 60,000 women and men at the turn of the century. More recently, the ‘MY World’ survey, reaching 8.5 million people, demonstrated that it is indeed possible to incorporate people’s views into policy-making at scale. We need more such initiatives and at the country level too. Here’s just one example of how effective it can be:

U-Report is a free social messaging and accountability tool that allows any of its 1.7 million members worldwide to respond to polls and speak out on issues they care about. Polls and alerts are sent via text and real-time responses are then aggregated, mapped and the results shared back with the community.

In Liberia, the issue of ‘sex for grades’ (female students harassed to have sex with teachers in return for grades) was known to be an issue but to find out the scale of the problem, U-Report decided to poll young Liberians: ‘do you agree that sex 4 grades is a problem in our schools?’ They got a 22% response rate – 13,185 responses out of 60,041 polled – in a single day. A staggering 86% of responders said ‘yes’. The government child helpline was inundated, leading the government to work together with UNICEF to plan how to improve long-term teacher accountability measures.

This single example highlights the potential for citizen-generated data to grab a government’s attention and demand a response. The ‘leave no one behind’ agenda must harness the momentum of the ‘data revolution’ to reveal the issues of concern to underrepresented groups. New technologies offer the chance for people themselves to collect, analyse and then communicate data about their needs and preferences. Leaving no one behind should mean giving everyone the chance to access such opportunities.

While better data can enable us to discern broad trends and issues of concern to underrepresented groups, we also need to listen to their stories and voices in deeper ways. My favourite way to spend a Saturday morning is to listen to a ‘Moth’ podcast. The Moth, an NGO dedicated to the art and craft of story-telling, supports people to tell true stories, live and without notes, to an audience. The stories are humble – about quiet, everyday occurrences that wouldn’t make any headlines – but they break down barriers, showing us the similarities between us and the vulnerabilities we all face.

As extensively documented, for too long the development community has held ‘beneficiaries’ at arm’s length, ignoring the complexity of their stories for over-simplified and stereotyped narratives about givers and receivers. The ‘leave no one behind’ agenda should represent a call for the development community to become better story-gathers and story-tellers – to provide platforms for the most underrepresented people to share their experiences.

One way to do this is through participatory photography. Two years ago, ODI and PhotoVoice embarked on a project to better understand the perspectives of those experiencing change first-hand and provide communities with a platform for sharing their stories of what’s working and why. We partnered with local organisations in six countries and trained people with skills in photography and story-telling. We asked them to share their perspectives on how and for whom progress was happening and the improvements they felt their country had made in key areas of wellbeing.

Participatory photography allowed participants to articulate the issues of interest to them and offered an alternative means of expression for those who felt less able to communicate confidently in writing. The photographs have been presented to policy-makers and civil society actors at conferences worldwide, as well as within their local communities. Their stories provide an opportunity to challenge negative assumptions about the impact of development, highlighting where things are working well and what needs to be done to bring further improvements.

Meanwhile, the skills and cameras left with participants have enabled communities to continue to use photography as a mechanism for expression and advocacy. Inspired by the workshops, seven of the women from Tunisia, for instance, co-founded the Association of Female Photographers (ATFP). They argued that the participatory photography workshops proved ‘a turning point for them, as they discovered the real power of photography, learning how to address social issues through their photos and develop photo stories that could support global change’. 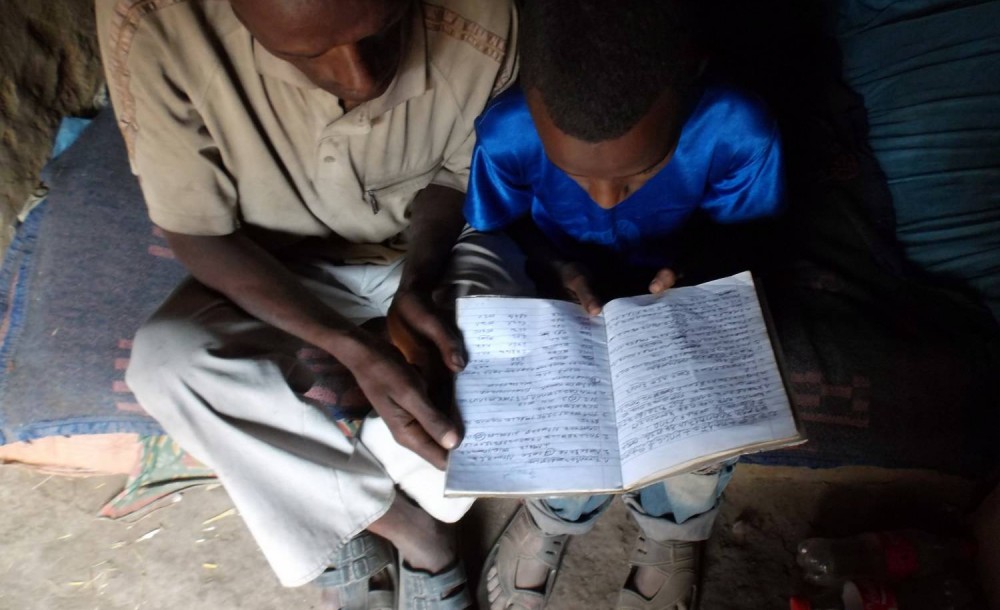 “All education in my country used to be taught in the main language of Amharic, but my local language is Oromia. Because of this many people in my community, including my parents, weren’t able to go to school as they couldn’t understand Amharic.” Photograph by Yusuf

As we move from rhetoric to action on ‘leave no one behind’, we need many more participatory photography, video and story-telling projects such as these that allow the poorest and most underrepresented people to represent themselves. The development community must place more emphasis on participatory evidence – both data and the stories that lie within it – if we are to truly speak truth to power. It’s time for us to get out of the limelight.