Sudan: Africa’s plastic footprintPhotoVoiceJanuary 12, 2016January 12, 2016
Alexander Mourant, photographer and participant on RAW Foundation’s journey through Africa, November 2015 – March 2016, talks about using photography to create awareness, social change and important solutions to single-use plastic waste. This is the second in a five part series which will chart the progress of Alexander’s project.
Since I last blogged we were travelling south to Luxor in Egypt, we’ve now passed through both Sudan and Ethiopia. We have seen some incredible things so far, taking note of people and places, learning what is nationally recognised or misunderstood by a Nation regarding the environment and itself. It’s difficult to put into words the past month, I shall instead discuss some thoughts which really resonated.

Travelling through Sudan held an air of excitement but also touches of terror. Sudan is a country which has always held an extreme paranoia towards its visitors ever since its independence.

I spoke to our driver, Steve, who is well versed in African culture and has travelled throughout for the last 30 years. He recalls a time not too long ago, when he and passengers were followed, not even with an air of secrecy. Your every move was watched and relayed to a higher authority. It’s like you’re a criminal, although your only guilty of seeing. This played havoc with my vision of personal truth and authenticity.

At present the tourism tension has eased slightly. However, to photograph in Sudan requires permission from the Government, a license which can only be acquired from the country’s capital Khartoum. For any visitors (such as us) entering Sudan from one of the many other border points, this creates the inability to gain a photography license. Even so, being in the right place and right time to apply for the license doesn’t by any means suggest the permission will be granted. The Sudanese Government holds a strict policy that photographs of their people, buildings, bridges or any infrastructure for that matter is absolutely forbidden.

It might be prudent to point out that not only the Government, but through personal experience the people of Sudan are still very wary of visitors and are equally paranoid about their photography. It’s a preconception of the West, a strong paranoia of how we will see and represent them. Which for a photographer is tragic, you’ve already been categorised by a distorted perception and then convicted before you’ve even begun.

We had to, of course, enter Sudan without permission to photograph. In transit with trepidation I occasionally shot through cracks in the windows. I still wanted to explore the connotations involved with being denied to photograph, understanding the Sudanese perception of Westerners and our media. 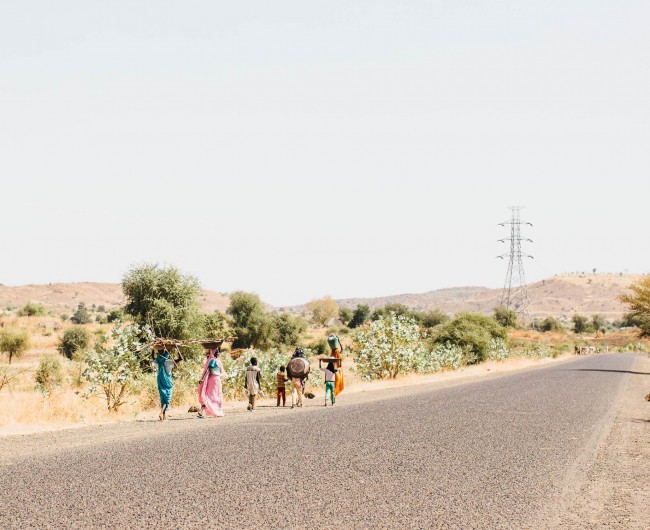 “Captions normally detract the viewer from the unseen and personal interpretation. However, as this is one of the only photographs taken in Sudan and regarding the circumstances it’s titled ‘To Look Back.’ 2015”

However, there are two sides to the argument. With technology advances we’ve seen a global increase in personal devices such as smart phones, these devices create a infinite number of connections instantly sharing information. One of the greatest accessories to all these new devices is a camera. The Sudanese people are inevitably photographing more and more – documenting special occasions, moments, creating family albums – they too photograph for memory sake endeavouring to resist time’s relentless melt.

Humour me as I started to imagine an ideal scenario, if attitudes were to shift with Government (as it’s begun with the people) a grand social change could be on the horizon. Picture a nation whose key to a renewed social perception was born through that which previously shackled. Photography, if embraced further, could prove a champion in bringing forth a new understanding, a sense of place and identity for the people of Sudan, and for the people of the world to see the culture, the beauty, of a previously hidden and sanctioned country.

In-depth insight into Ethiopia is promised next.