PhotoVoice is interviewing established photographers to gain a wider insight into the power of photography and the different approaches to ethical issues. This month, we interviewed Stuart Freedman on his photography and his passion for the medium.

Stuart Freedman is a renowned and award-winning photographer and writer. His images often capture small moments of joy in areas affected by war and poverty. Stuart writes for Metro Print, “Why shouldn’t the poor, the maimed, the brutalised, somehow steal a smile, fall in love? A determination to live. To be normal. To be just like us.”

It began when I was studying for a Politics and Modern History degree at university in the 1980s. In my final year, I discovered a magazine called Photography edited by Nigel Skelsey (then at the Telegraph) and Victiria Lukens (who I’d later work for at the Independent on Sunday Magazine). It was a revelation – here was a serious photography magazine that showcased extraordinary work from all over the world. I had no interest in photography until that point but I thought ‘this is what I want to do’. Actually, I had thoughts about being a writer – but people who came from where I came from (Dalston in East London) didn’t become writers. Photography seemed like a way to say things about the world – and still does. I hadn’t really picked up a camera until then and I was an appalling photographer – I had really no clue, I just immersed myself in great work and kept going. 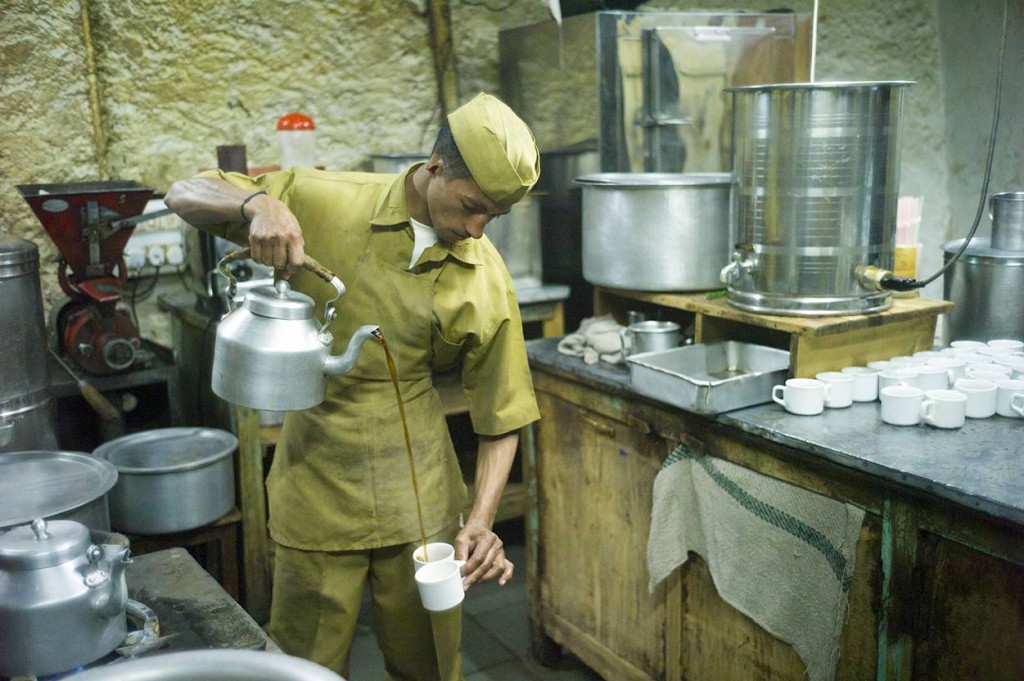 I’m not sure that I have one to be honest. I just try and make serious, honest work about things that I want to talk about. I think that I’m firmly based in a very traditional aesthetic – Humanist documentary photography – a much more direct, less fashionable approach than some of the theory-based practices I see bleeding from the art world today.

Well, in terms of subject, ‘worthiness’ is defined by the story – one that I feel is either important or not. In terms of image I can only say that I try and make simple, (hopefully) beautiful, engaging images that stand alone and tell the viewer a story.

Well, hopefully after all this time there might be a few… I think I was known for a certain type of bleak, dark black and white subject matter until early 2000s – especially for two series. One, The Lord of Flies that looked at violence and young men caught up in Africa’s civil wars in the late ‘nineties and the other from a set called The Mutilated about the victims of rebels in Sierra Leone from around the same time. That said, I’ve always worked in colour and an image of men bathing under a waterfall in India from the mid 1990s seems to resonate with people. In terms of images that speak of subject matter, colour work from Mauritania (a set about the wind), Rwanda (AIDS), the elderly (India) and perhaps work on Indian Coffee Houses (my new book) might be good examples. 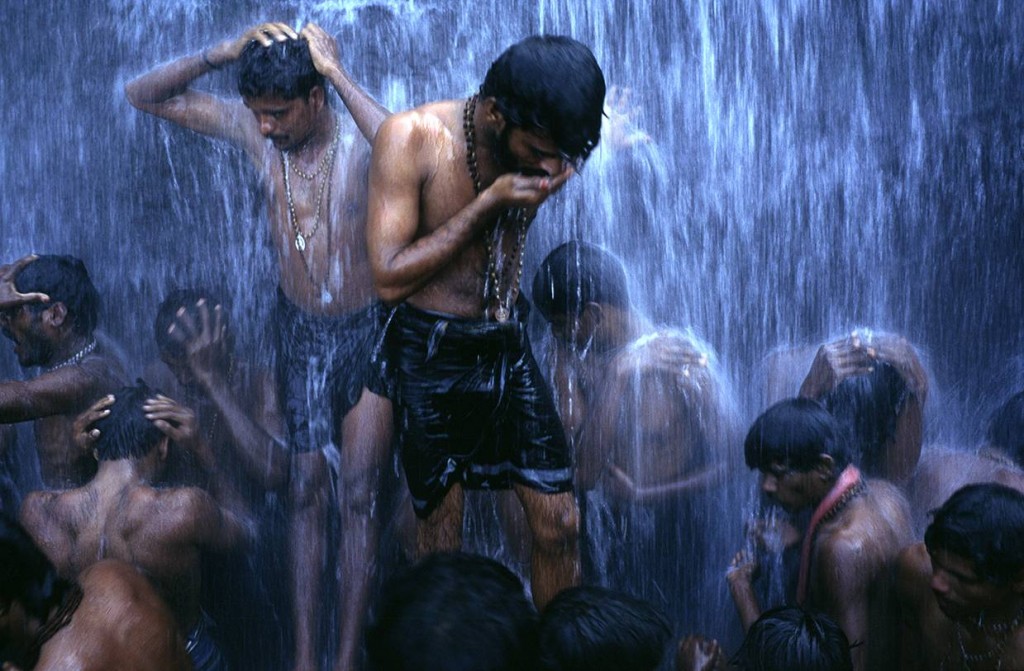 “Followers of the Shiva sect of Hinduism ritually bathe at a waterfall in Courtalam, Tamil Nadu, India.” ©Stuart Freedman

By itself, no. It can however educate and inform. If I didn’t believe that I would be doing something else. Surely the point about documentary photography or photojournalism is showing the world to the world in order to effect change. If not, it’s simply voyeurism – and that helps nobody.

Yes, enormously. It’s certainly changed in terms of sophistication. I think early on charities were trying to engage an audience with stereotypical images of victimhood that gave no voice or (in many cases) dignity to the subject. I think that spoke of a lack of context about the situations that they operated in. Or a lack of faith in the viewer. I think the message is more nuanced now: images that try and explain as well as simply show. However, there’s always dilema with charity photography in that it’s entirely one-sided and, like an advertising campaign (which essentially it is) is often narrowly focused: it’s there to raise money for one side and, as journalists we have to acknowledge and remember that.

The contemporary photographic (and journalistic) landscape is full of ethical traps not least in the practice and recording of photography. We live in a celebrity culture controlled by big business and advertisers who have a financial stake in selling things. Professional journalists have to set themselves above what so-called ‘citizen journalists’ can offer. It may be that in the absence of a professional journalist, the amateur’s images may run first. But whose images will the public trust? The veracity of what we as professionals produce should be the defining factor that sets us apart from the herd. We have to make work that is trusted and is analagous to a journalists direct quotes. That means we don’t set things up and we don’t alter in post-processing. Moreover it means that we have to think seriously about the work we undertake and why. Our responsibility to the subject is clear – one has to have a really, really good reason for sticking a lens into other people’s misery: making a sucessful career or pandering to one’s ego shouldn’t be one. Neither should simply making a living.

Oh, I don’t know – it’s not for me to say really. I’d rather be remembered as a decent human being rather than just a photographer. That said, if I’ve interested a few people in stories or issues that they’d never engaged with, I think that’s good enough. 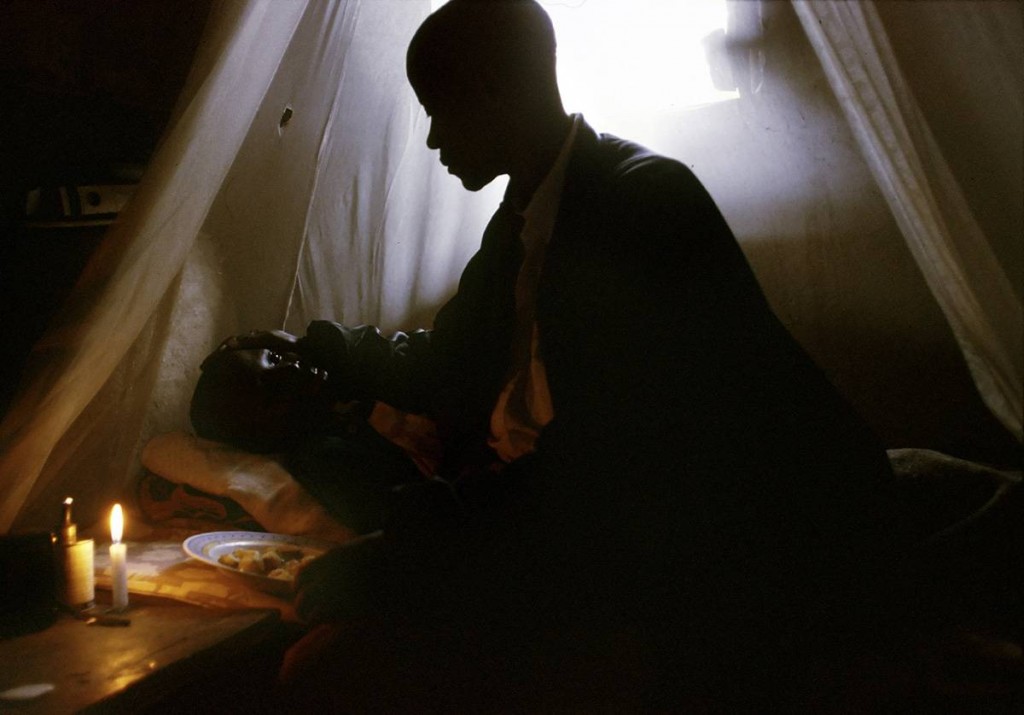 “Saidi Ruhimbana comforts his wife Anastasie. Both have AIDS but Anastasie is very sick. In order to pay for medicine for their treatment they have spent their savings and taken some of their children out of school. Saidi was formerly a builder but is now too weak to lift anything heavy. Kibileze, Rwanda. From the series, Facing the Virus.” ©Stuart Freedman

Important enough in that it has to consistently work but not important enough to blind someone into mistakenly thinking that it’s more important than the image or the people you’re photographing.

Well, I think for photographers that want to forge a similar path, I’d suggest that they have a really good think about actually why they want to do the work. My other advice is more prosaic – be fascinated by the world, enagage with it and want to make it a better place by your work. Photography is just one way of doing that – writing or film are others and I think that as we live in an increasingly converging digital age, the multiplicity of reporting mediums will be increasingly important.

Feature image: © Stuart Freedman ‘Two former boy fighters from Charles Taylor’s militia on the streets of Monrovia, Liberia argue with and threaten another boy. From the series, The Lord of the Flies’

We're delighted to present our new toolkit, In Foc

A few places left at our next training at the end