PhotoVoice is interviewing established photographers to gain a wider insight into the power of photography and the different approaches to ethical issues. This month, we interviewed Tom Stoddart on his photography and his passion for the medium.

Tom Stoddart is a renowned and greatly admired photojournalist. He began his photographic career at the age of seventeen for his local newspaper in the North East of England. With almost fifty years of experience, his diverse career has covered the fall of the Berlin Wall, the AIDS pandemic in Africa and the Iraq war.

I wanted to be a reporter and there was a job advertised in my local paper in the North East of England for an apprentice photographer. I though that if I could get that job I might be able to move over to be a reporter. I applied for the job and I got it.

Within a couple of days, I knew that I didn’t want to be a reporter and I was much happier learning to be a photographer. The reason was simple it was because even in those days’ reporters spent most of their time on the phone but photographers on this little paper went out into the community and it seemed to me to be a much more adventuress lifestyle.

Photography has been my life. On the first week when I started there was an older photo editor who said that photography will give you a champagne lifestyle with a beer salary and he was right about that. 46 years later and I still think that it is an absolute privilege to be a photojournalist and to be able to witness amazing international events that most people never get to see. That’s the joy of the job really; that you can go and be a witness to all of these amazing things that happen around the world.

I don’t, I work on instinct. It’s not like looking at something and thinking over a long period of time ‘I’m going to do this’. You have to photograph what you feel. If you see something but don’t feel anything for it then that’s a good parameter to keep walking, but there are some scenes and some people that pull you towards them. Because you are trying to capture emotion, the pictures are something that trigger emotions both within the photographer and the viewer. That’s what you are seeking when you are walking and working.

There are pictures that I have that other people define me with. I’ve covered a lot of conflict and natural disasters but I’ve also photographed beautiful events and experiences like the night the Berlin Wall came down and photographing Mandela as he became president.

Children have played a big part in my career because wherever you go in the world children figure prominently in the kind of work that a photojournalist does. Whether you’re in a refugee camp or a conflict zone, children will always surprise you and always show that there’s hope in a situation. 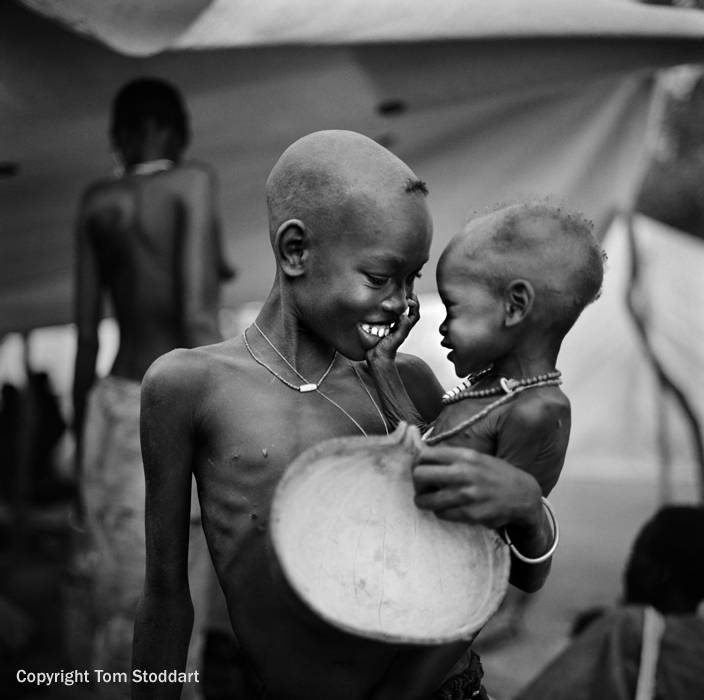 ‘Sudan, 1998 – a rare moment of joy between siblings at the Ajiep feeding centre in southern Sudan’ © Tom Stoddart

That’s the biggest thing about being a photojournalist: to inform, to educate and try and effect change. Truth is very important, your pictures have to be truthful and people have to believe them when they see them. You are there documenting whatever is in front of you on the behalf of the people who will open the newspaper so it is very important to have a sense of authorship. You are literally an author with a camera and you are trying to tell a story to explain to the viewer what is going on and what is happening so that they have a better understanding of situations around the world.

Oh immensely. Charities now have to compete for funding and the big change in NGOs is that when I first started, they weren’t very professional in their photography department and now all of the major charities have big photography operations. They understand that to have good imagery is vital if they are going to convince people that they should donate money. Photography is much more important to charities now because they have to compete in a world that is lead by imagery. It’s a positive thing… charities have logistics people, they have protection and a code of ethics and standards so it helps the photographer to be able stay in the field. Some of the best photojournalism that is done is in collaboration with a charity.

Charities like MSF [Medecins Sans Frontieres] are obviously a medical charity so the photographer is expected to work to their ethics which are high. The International Committee of the Red Cross also have very specific standards of what can and can’t be photographed. You have to adapt which is a very good thing because it is important that a photographer’s photographs are respectful.

Ethics come from within and if you have a photographer who is not coming to the situation from an ethical standpoint there is not a lot you can do about that. But good photojournalists are, in my opinion and from my experience, sensitive and ethical people who are there to make pictures that will effect change. 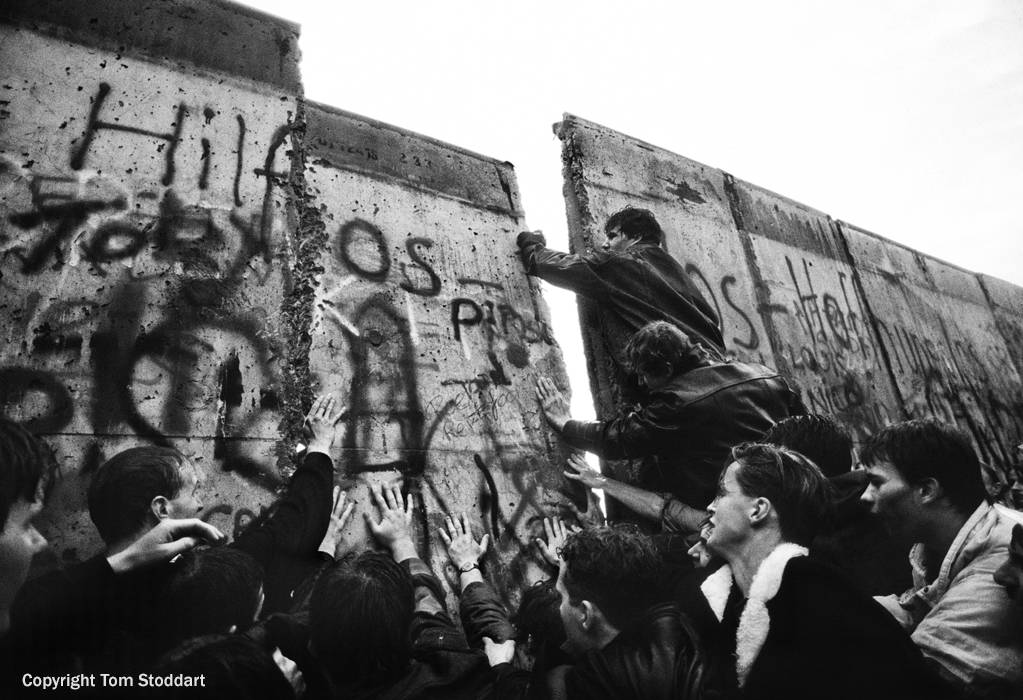 ‘Germany, 1989 – The first section of the Berlin Wall is pushed down by the hands of crowds of determined people on the morning of November 10th 1989.’ © Tom Stoddart

From your point of view PhotoVoice is just that. PhotoVoice gives cameras to people who have never had the privilege of picking up a camera, and the pictures they make are extraordinary and that comes from within. Really the camera is just a box with a hole in it which allows you to capture moments and make a hard copy of what’s actually in your mind, what you are feeling.

Be optimistic about the world we live in and be determined to take the right pictures for the right reasons.

The following video was narrated and produced by Neale James the founder of Breathe Pictures, a film and commercial photography company that specialises in documentary projects and social awareness campaigns. Find out more about their work here