Uncovering Bangladesh Through a Female Lens

To coincide with an exhibition that opens today at Rich Mix Lucile Stengel Head of Marketing and Communications at Lensational UK writes of their participatory photography project in Bangladesh.

In the past year, Lensational conducted participatory photography training with thirty eight Bangladeshi women and girls: eight teenage surfer girls in the tourist town of Cox’s Bazar, and ten female garment workers in two garment factories in Dhaka. Lensational’s work in Bangladesh was motivated by one central idea: that women and girls should be able to tell their own stories. 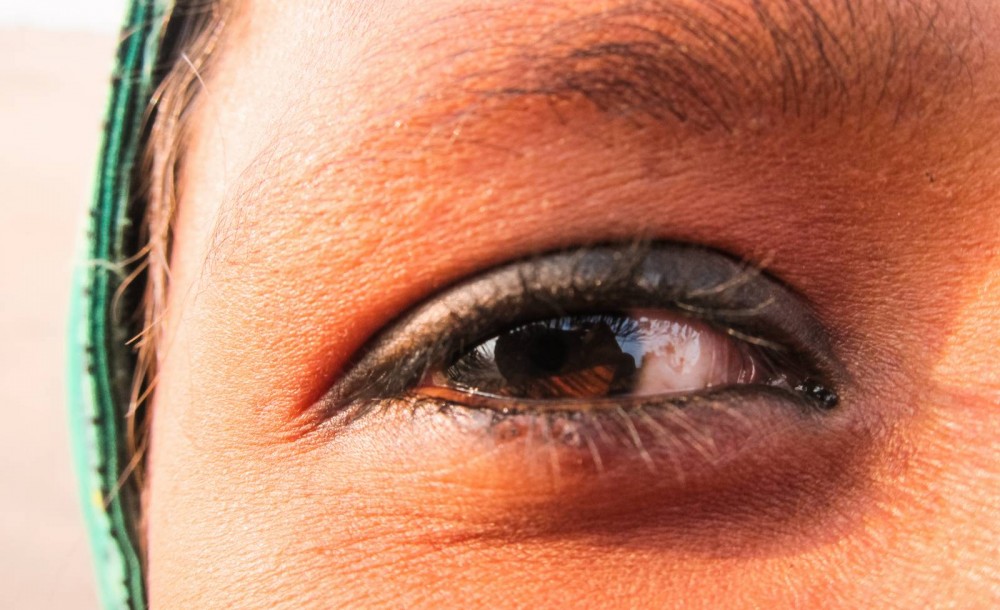 Globally, Bangladesh scores poorly on the gender equality agenda: it has the second highest rate of child marriage, and girls in lower income communities are forced into labour at a very early age, having to give up the prospects of an education. Bangladeshi society is slowly moving away from the idea that women are an economic liability: women represent a growing number of the workforce, and the number of women represented in parliament has doubled in the past decade (UN, 2015). But women and girls are still held back by a patriarchal culture, which, between traditionalism and modernity, makes it difficult to find freedom outside of the home. In rural areas, women still don’t have ownership over land and tools for agriculture. In the garment industry, women are disproportionately exposed to health and occupational risks. At home, their ambitions are often shattered by the prospects of an early marriage. 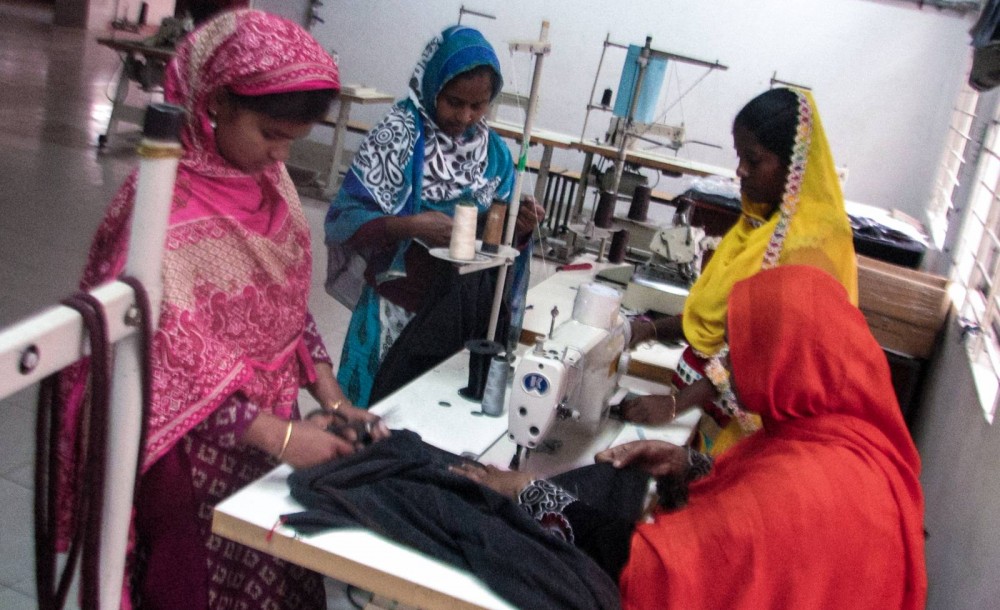 For all these reasons, it is important that Bangladeshi women and girls’ stories are shared in the media and beyond. But current power structures pose significant challenges to the female voice in Bangladesh: women’s representation in national media remains merely peripheral, while patriarchal norms often discourage women from speaking freely outside of the home.

Lensational’s work with the teenage girls of Cox’s Bazar and the garment workers of Dhaka and Gazipur aimed to bridge this gap: to provide women with the tools and confidence to share their own stories, and to help them regain a sense of agency over the world around them.

In February 2015, we conducted participatory training with eight teenage surfer girls in the tourist town of Cox’ Bazar. The surf girls are a group of cheeky and audacious young girls who are being pushed into labour early to support their families. Every day, the girls sell goods at the beach to earn their families extra income, without which they wouldn’t be able to survive. But a year ago, the girls’ lives took an atypical turn:  they started to learn how to surf with the local surf club, in a bold move against local conventions. What followed was a complex journey to empowerment, from their confined homes, to hard work at the beach and the male-dominated surf club. 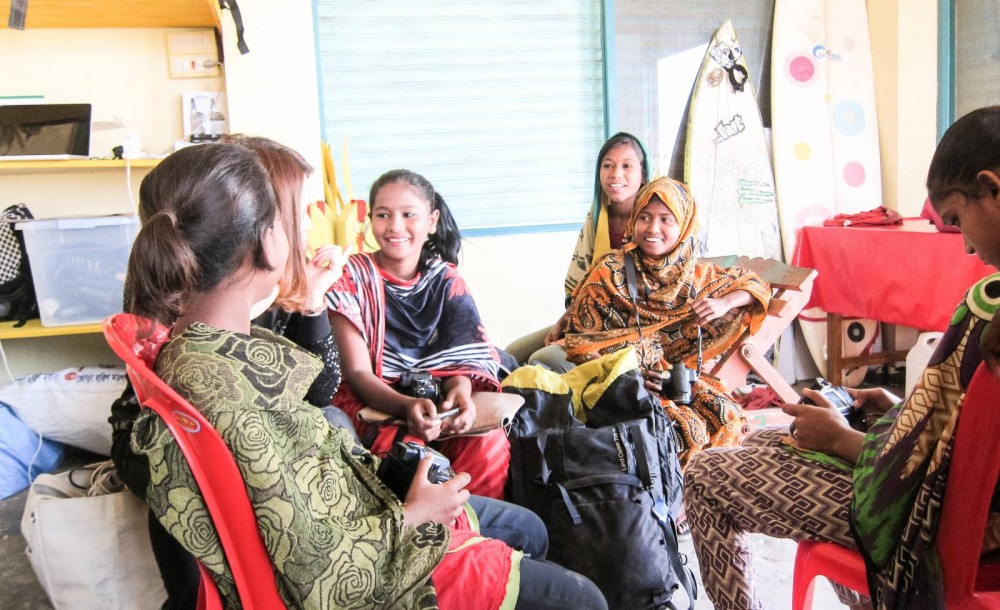 The girls flip through their cameras after a training session at the local surf club.
Credits: Nargis

We worked with the girls to help them make sense of these tough times through participatory photography training: we equipped them with digital cameras, photography and storytelling skills, we taught them to narrate their own stories, and to capture the world around them. Their photographs revealed a striking duality.  On the one hand, they provided an intimate view of the girls’ daily lives: the modest homes, the long walks to the beach, and the women’s hard work in the field. One the other hand, snapshots at the beach and in the city revealed strength, ambition, and hope, reflecting the girls’ audaciousness and their hopes for the future. 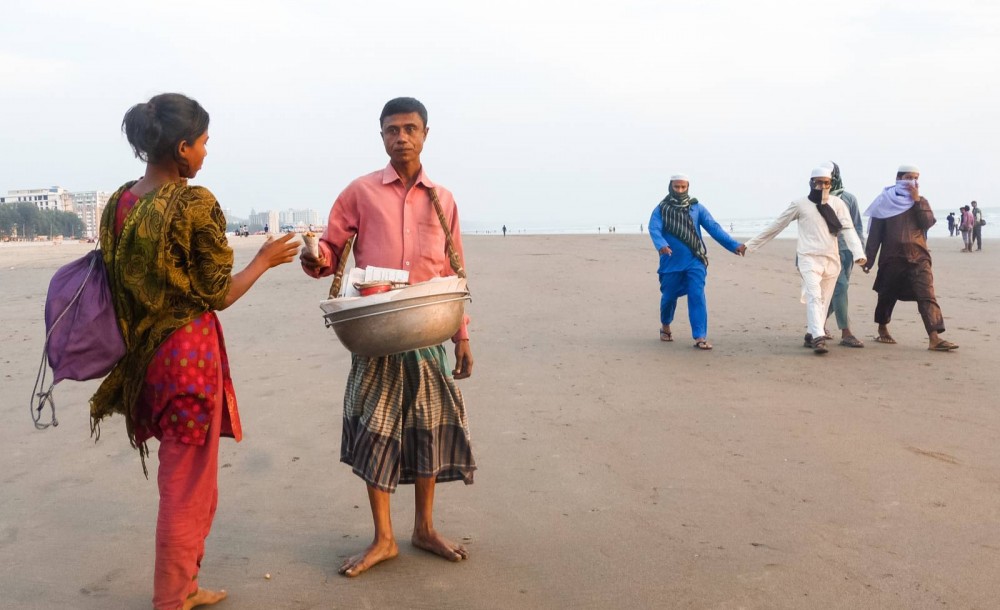 ‘An Exchange’
Rifa, the youngest of the surf girls, talks to another vendor at the beach in Cox’s Bazar.
Credits: Aisha

In May 2015 and February 2016, we worked with two other groups of women, female garment factory workers, in factories that rarely open doors – Earl Fashion located in Gazipur, and SIMCO located in Dhaka. Through photography, the women documented their lives at the factory. They could reflect on their daily routines and struggles, and connected with other workers, building trust and aspirations for the future. Most importantly, they found an opportunity to talk about other aspects of their lives: to share personal stories as women, co-workers and mothers, forgetting the garment factory for a moment. 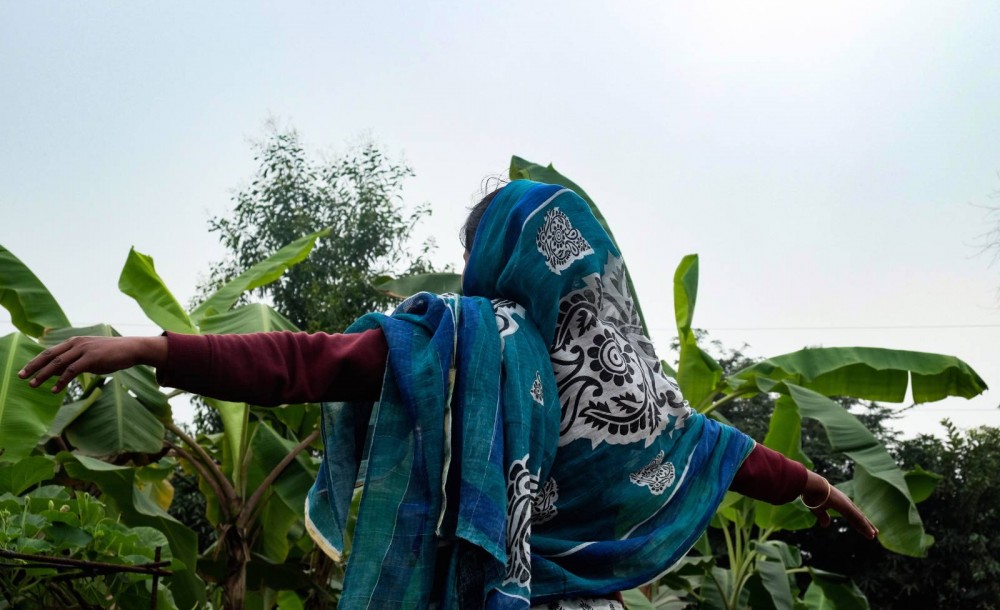 A garment worker enjoying a break in the garden near the factory.

The photographs taken by the teenage surfer girls of Cox’s Bazar and the garment workers of Dhaka and Gazipur paint a view of a world that is rarely seen: the world of Bangladeshi women and girls. They demonstrate the complexity of the female experience in Bangladesh, but also its strength and resilience, in snapshots that challenge conventional tropes of oppression.

Discover the world of Bangladeshi girls and women on the opening of Lensational’s exhibition ‘Unfurling Bangladesh : the picture through her eyes’ at Rich Mix Foundation this Wednesday 23 March. The photographs showcased will be available for sale during the exhibition, with the revenues going back directly to the photographers. While the ability to present the women’s stories to the audience is a crucial form of empowerment, revenues from photographs sale ensure that the women make independent choices for themselves in the future.

Ahead of the exhibition, Lensational launched a social media campaign, #herlensherstory, which aims to celebrate women sharing their own stories. Join the movement: share a photograph and your own ‘Herstory’ using the hashtag #herlensherstory on Twitter and Instagram.